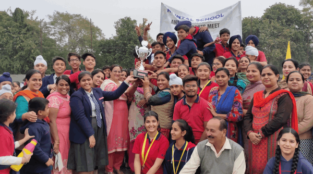 The much-awaited Annual Sports Meet was held with great zeal, excitement and a frolicsome atmosphere. The event began with the March Past, followed by a flag hoisting ceremony. The sports meet was declared formally open by our honourable principal, Mrs. Rajinder Kaur Virk.

The students entered into the spirit of the occasion in a grand way with the oath. Once the races began, the air was filled with cheers of encouragement for the young athletes. Matka race and a tug-of-war for staff members added to the enjoyment.

The Cock House trophy and the overall champion trophy was bagged by the Kalpana House.