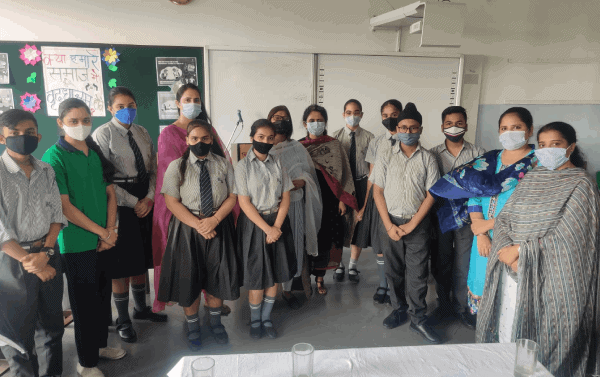 At Kaintal school we always emphasize inculcating moral values in children from the early stages itself to build a peaceful and prosperous society. Keeping this in mind, Kaintal school organized a Hindi Debate Competition –‘Vaad Vivaad’ for the students of IX & X. The students were made to debate on the topic :
” हमारे समाज में वृद्धाश्रम होना चाहिए क्या आप सहमत हैं या नहीं?”

The debate emphatically aimed at helping our students to appreciate the ‘Pros and cons of the issue. It gives students creative room to express what they feel. The students spoke vehemently on the issue and came up with their perspectives. Each participant rose to defend their arguments.

The debate was lively with a plethora of arguments and counterarguments. Some participants argued for the motion and some were against the motion. They cited reasons to justify their stand. All the teams exhibited great oratorical skills. The energy exuded by the participants was overwhelming. The judges were deeply engrossed in the ideas of the students and they praised the courage and spirit of the participants. The audience highly appreciated the debate and everyone thoroughly enjoyed the event.